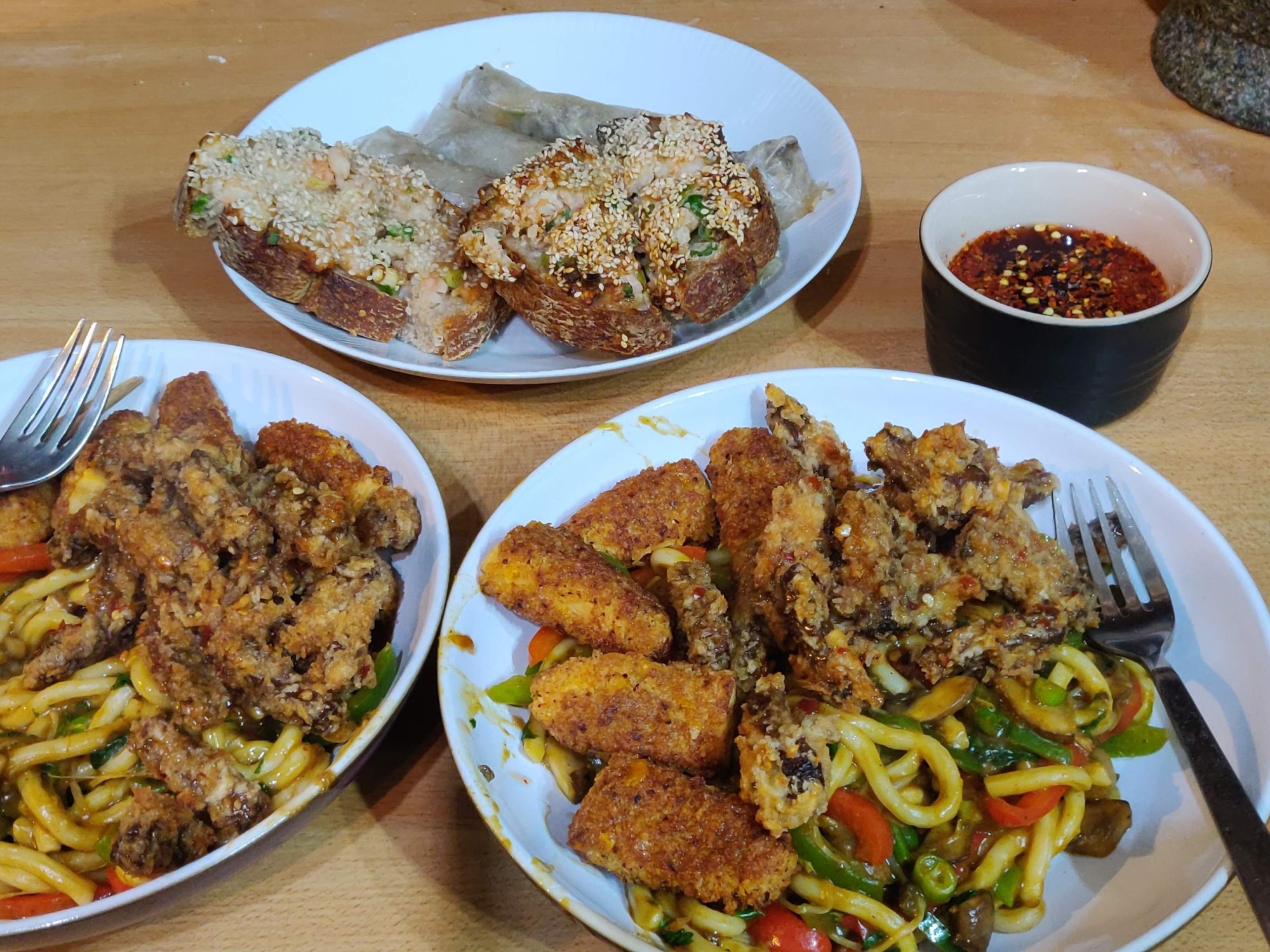 Much as I love a good Chinese takeaway of fried noodles, smoky chicken, chilli beef, sesame toast, dumplings, prawn crackers, etc, it quickly adds up to a week’s worth of calories in a single sitting, and as I haven’t lost my holiday weight yet, it’s just not on the cards right now.

So I’m going to try and create my own version that’s considerably healthier and lower in calories.

I’m going to use Quorn for the ‘meat’: smoky ‘chicken’ pieces, plus ‘steak strips’, replacing chicken and beef. But I’m going to dress them both up to be more smoky, and somewhat chilli like. Noodles will be ‘ready to wok’ noodles (which are anything but, and I won’t be using them again, but I’ve got some to use up), and will be healthier simply by not being fried in swaths of oil, but just some oil spray.

First things first though, if I’m doing prawn toast, I need bread, for which I’ve made a sourdough loaf for.

It’s a little puffy as I don’t think I beat it back enough when forming the loaf, and maybe over-proofed it this morning before putting it in the oven. let’s hope it’s not full of holes when I cut into it, as that’s not going to work for prawn toast! Talking of which, I’m going to be roughly following this BBC Good Food recipe, but cooking in the air fryer, rather than shallow frying.

After chilling this gets spread on the sourdough bread and topped with loads of sesame seeds, and the leftover added to the spring roll mix (more about that later).

While that was in various stages of production, I chopped a bunch of veg for various things: main noodles, spring rolls, etc. Oh and a liquid mix in the background: Japanese curry cubes, rice wine vinegar, soy sauce, etc.

For the “meat”. Smoky ‘chicken’ turns out to be more chicken nuggetty than I expected… so I just chopped in half and brushed with a mix of more leftover egg white and liquid smoke.

Chilli ‘beef’ was as expected, little strips of ‘beef’ – so flour, egg white, Panko breadcrumbs for them.

All on a tray ready to bake later.

Making spring rolls is weird. You open the pack of wrappers and they’re brittle round sheets of plastic… but once soaked in water they turn into invisible sheets rolling material!

Last part of prep is the chilli sauce for the chilli ‘beef’. Similar rice wine vinegar, soy sauce, etc, plus a good pinch of chilli flakes. Cornflour will go in later when it’s reheated.

So… now for the 20mins of of everything being cooked… STRESS!

And actually it worked pretty well!

Toast was really good! Like proper sesame toast! Spring rolls… well more dumpling like (no crunch). Noodles and ‘meat’ – well as expected a fax of what they were supposed to be.

Both of us full now, with 6000kcal saved from making it ourselves!

One thought on “Chinese Fakeaway”