I came across this genius idea for mac’n’cheesecake on Reddit a while ago and tonight’s Super Bowl is the perfect reason to try making it!

The biscuit-/cookie-crumb base is replaced by a breadcrumb base. I made my own from a brioche loaf I bought, pulsed in the food processor, then toasted in the oven. I then mixed with butter and lined the spring-form tin and baked before adding the topping.

The main cheesecake part is a drier-than-normal mac’n’cheese with eggs to help it set like a cheesecake. I won’t go into details here as the original post covers all the details you need with clear pictures for all steps. The only changes I made were to add some garlic and chilli to the mix, because we do that to everything in this house, and replaced the tomato in the recipe with bacon because as the sign above our kitchen door says: 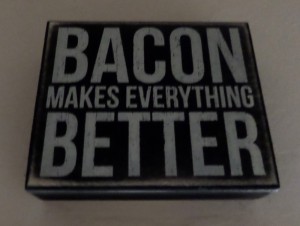 So the cheesecake mix goes on the breadcrumb base and cooks long and low in the oven, and comes out… looking like a cheesecake! 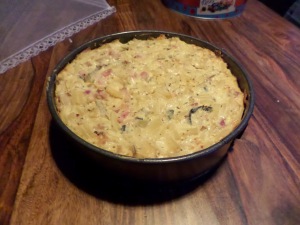 Taking off the spring-form ring… and it holds together perfectly! 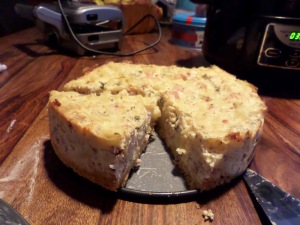 We discovered when we visited New York last year that mac’n’cheese is considered a side dish in America! We’ve already got way too much food planned for the big game tonight, so we’re having this for lunch with a beetroot salad with a mustard vinaigrette. 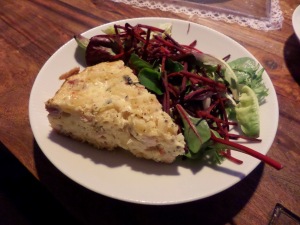 Despite being set it doesn’t taste dry at all. The different cheeses all work together to make a lovely creamy texture. It really does taste great, and looses nothing from pretending to be a cheesecake.

The breadcrumb base is delicious, but could do with a bit more of a crunch to it. I considered putting the breadcrumbs on top, like a normal mac’n’cheese, then turning over to serve, but I think Soph came up with a better idea: panko. Now I’m not sure panko would stick together properly on its own, so I think the trick might be to add panko to the breadcrumbs to give it that crunch we’re looking for.

The other change I’d make is to add back the tomatoes from the original recipe. I’m not sure why I left them out… I could just have added bacon without removing them!

I’m also considering what could be done with toppings that looks like cheesecake toppings. Cherry tomatoes with chilli jam, pretending to be a cherry topping, sounds fun!

So well done to Food in my Beard for a genius idea, a well-written blog showing all the steps to make it, and for the final product being delicious! It’s certainly something I’ll be making again, and it’ll be perfect for potlucks at work, and for family picnics in the summer.