Another ATK makeover, and this one has the benefit that as we’re not really familiar with enchiladas, we’re not going to know what we’re missing!

I’m making my own tortillas for this. For authentic Mexican tortillas you’re supposed to use a corn-based flour called masa harina, but I couldn’t find any of that. Unfortunately there doesn’t seem to be a good substitute; despite the name similarities cornflour isn’t a good substitute…

So what I’m doing is making my wheat tortillas and substituting some polenta in to try and get some corn flavour in there. So the ingredients are:

It all starts with the dry ingredients. 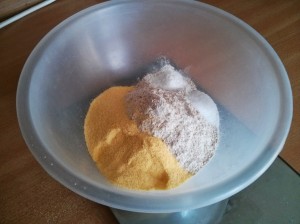 These get whisked together, then the oil and milk are added to form a dough. 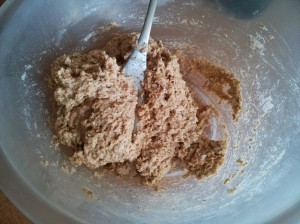 This seemed much wetter than normal, and took a lot of extra flour while kneaded, and involved my hands getting horribly sticky. Next time I’ll do this in the mixer! Anyway… 10 minutes kneading and I’ve got a nice dough. 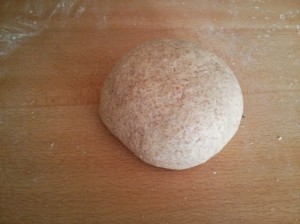 This stands for 20 minutes before it gets divided into 8 balls ready for rolling out.

Rolling these out to nice round shapes has always been difficult. So I’ve invested in an Indian Chapati-style rolling pin called a belan. It’s much thicker in the middle, and lets you roll from the middle outwards over and over without stretching the sides at the same time.

After rolling one out it goes into a dry, non-stick frying pan for a couple of minutes on each side. While it’s frying I roll out the next one.

After lots of repetition, I’ve got my 8 tortillas.

Then it’s time for the sauce and chicken. This starts with frying up onion, garlic, cumin, lots of chilli powder (3 tablespoons: we approve!) & sugar, then adding pasata (sieved tomatoes) and water and boiling it down a bit.

Into this you put your chicken and let it cook through, then pull out the chicken and shred it up with forks.

The remaining sauce gets sieved, and the lumpy parts added to the chicken.

To the chicken mixture we add reduced fat cheddar, coriander, jalapeño peppers and some of the sieved liquid.

This gets spooned into the tortillas.

These get rolled up and put in an oven dish.

The sauce then gets poured over the top, and the rest of the cheese sprinkled on top. Unsurprisingly some of the mixture was left over, so we added a few spoons of sauce to it and kept for use later.

This gets covered with aluminium foil and baked for 25 mins at 160c fan. Once it’s done we turned off the oven and went to work on some potatoes. Rice might have been more authentic, but we had potatoes taking up space in the fridge… so we fried these up with a pepper and the sauce mixture we saved earlier.

We then revealed the enchiladas!

We served with lime wedges and some creme fraiche. 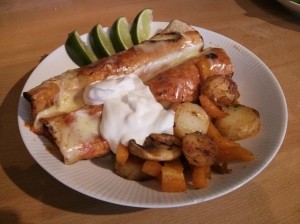