Hamentachen are a triangular Jewish biscuit, with a variety of sweet fillings. I’ve never had that much interest in making them until I came across this recipe that uses yeast (so I get to use my sourdough) and cooks then in a long Toblerone shape, which amused me.

I was tempted to go for a Toblerone flavoured filling, but in the end decided to go for Nutella & Halva as we have those lying around.

The recipe says to beat soft butter into the rest of the ingredients, but as it’s a shortbread, and I’m not sure how much starter to use in place of other liquid, I’m going to cut cold butter into the flour, then add liquids to bring it together. Also I’ll only be doing half the amount listed, as 560g flour sounds like enough for too many Toblerones!

Next is the egg – let’s hope it doesn’t form a dough with just the egg!

It didn’t dough up, so I’m adding 65g of refreshed sourdough starter, basically replacing both the cream and yeast in the recipe.

So now it’s into the fridge for a few hours to relax. 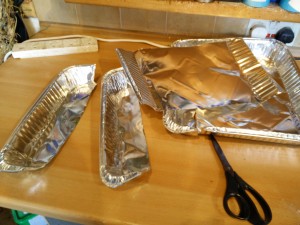 I even get to use staples to assemble them!

I divide the dough in half, and roll each out to roughly the size of the moulds, and fold over the sides to avoid leakage.

Then into the moulds… to find the dough is a little too big, and it wants to spill out the end and tops…

Some cajoling and stapling later, they’re in their moulds and get 45 minutes to proof / rest while the oven heats to 160C fan. 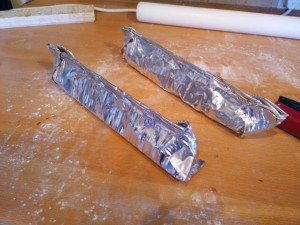 The recipe says 35-40 minutes: how on earth are you supposed to judge!? What: the tin foil should be a golden brown? A tooth pick should singe on the hot metal? I’m just going to give them 40 minutes. 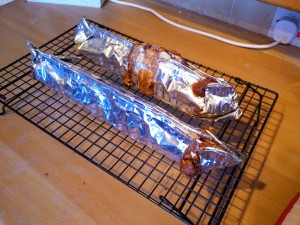 Not only was there some exploding, when I started to unwrap them they didn’t look fully cooked.

After another 10 minutes they looked better… but unfortunately the exploding had ruined the nice triangle shape :(

However the exploded bits taste great, so all is not lost! Can’t see cutting 1cm biscuits out of these though… but I’ll try once they’re cooled. 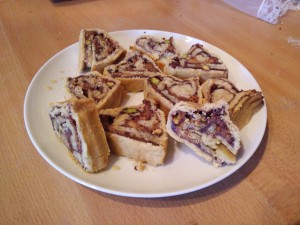 Surprisingly it actually cut into biscuits! And they’re kinda triangular. Huh — if I did this again, with less filling, these could be pretty good!

Plus – they taste amazeballs! Well.. Nutella & Halva – what did you expect?