Getting barley flour is really hard in the UK, I only know one place in London that does it, and it’s in north London (yuk!). You can get it on Amazon, but only in bulk, and it goes off really quickly.

So I’m going to try making dakos rusks replacing the barley flour in my original recipe with rye flour, and replacing the original 25g of rye flour with strong white flour so there’s some structure.

Then roll out the dough and make spirals (or dog poos…). 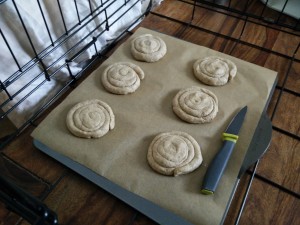 Proof four a couple of hours. (The knife is there to remind me to score them this time!) 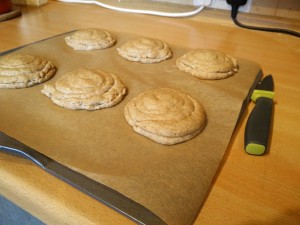 Slicking is easier with scoring, but I scored to low: the tops rose, so my score ended up being low. Also some bit broke, especially around the join of the spiral. Oh well – then then to get broken up before eating anyway.

Finally they need drying and crisping up for two hours at 110C fan.

They look and feel good. We’ll find out how they taste tomorrow in our Greek garden meal!