A couple of weeks ago I tried out my new cutters to make Custard Creams. Soph’s sister has requested I make them again for their return form Glastonbury, so that’s what I’m doing.

However there are other cutter that need trying out, so this week I’m expanding my range to include Bourbons. My plan for the recipe is to follow the Custard Cream one, replacing custard powder with cocoa powder, and white chocolate with dark chocolate, and dusting the biscuits with granulated sugar for that authentic Bourbon look.

After making the doughs in the food processor they go in the fridge to rest.

After rolling out it’s time to try the new Bourbon cutter.

It works fine to start with, but it’s really hot today so the dough heats up quickly, and by the end of the first tray it’s getting sticky and hard to work with, but I get there in the end.

I wasn’t sure if I should add the granulated sugar before or after baking. I decided to go with after, but I’m not sure it’s going to stick.

Then it’s off to cool while I do the Custard Creams. 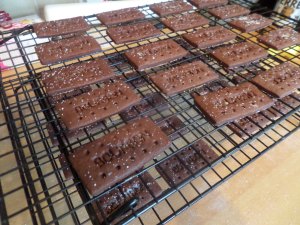 The Custard Creams are the same as last time.

Thankfully no worries about trying to get sugar to stick to these ones.

Unfortunately during cooling our sweet-toothed cat Grace attacked the Custard Creams, destroying another cloche in the process.

At least she seemed to approve of the taste…

Although she likes the taste, it’s not good for her. In the past it’s made her ill, but today it’s just made her go a little queer… 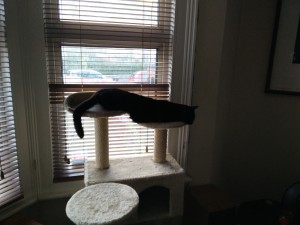 Anyway – back to the biscuits; specifically the fillings, which are just buttercream with cocoa or custard powder and melted chocolate. 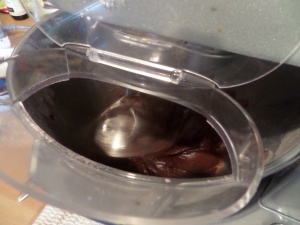 I was surprised to find that the sugar had stuck pretty well while I was doing the fillings.

Similar sandwiching for the Custard Creams.

Finally: time for a tasting!

The fillings are a little liquid, but hopefully they’ll set up as the melted chocolate sets up, but in this warm weather they might still be a bit squishy. I might have to look into a firmer filling for future versions.

As for the taste: pretty authentic I think! The sugar coating really helps get the right texture.

One thought on “Bourbons & Custard Creams”