Our dwarf morello cherry tree has had its first batch of fruit this year, so it’s time for a cherry pie!

Recipes for the filling from both Cook’s Illustrated and The Grauniad are pretty similar, so I’ll be roughly following those, adjusting for how many cherries we’ve got.

For the pastry base I’m going with a paté frolle (sweet almond pastry), and for the top a rough puff. Unfortunately it’s 30C here, which is far from good pastry weather…

I patched it up… but there’s no way that’s going to come out easily after an hour in the oven. Oh well – I’m sure it’ll taste great! 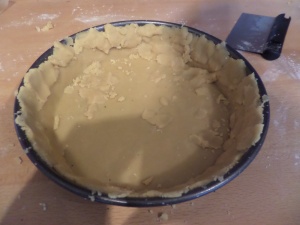 At least the rough puff top behaved itself.

Nearly an hour later in the oven.

Now we have to wait for it to cool. How can I make pies that don’t require this cooling bullshit!? 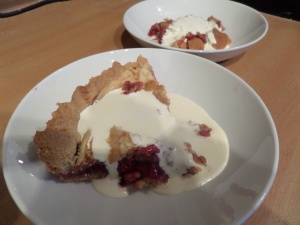 Mm mmm mmm! Nice sour cherry taste, and the almond pastry actually turned out reasonably short given the amount of reworking it got. The rough puff with egg/sugar glaze topped it off nicely, and of course cream. MMM!

Also it’s the 4th of July tomorrow, but we’re busy, so we’re having Murca burgers with our cherry pie :D 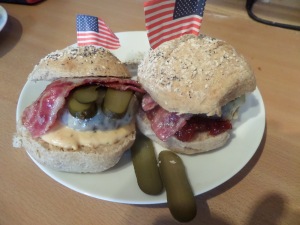