I’m going to keep things simple this month and follow the suggested pâte brisée (shortcrust pastry) recipe, which once converted from cups and cubits looks like:

Then add the sourdough starter.

Which comes together to form a rather wet and glutenous pastry dough.

This gets chilled before being used.

While it chills I make the filling. Or rather fillings, as I’m actually making two lots of pastry and doing sweet and savoury fillings for a double-gallete dinner!

For the savoury one I’m going with asparagus, goat cheese & homemade pesto.

Which is a little wetter than I’d like for going on pastry, but it’s too late to do anything about that now.

After rolling out and covering with pesto the goats cheese and asparagus goes on, along with some bacon that was lying around. 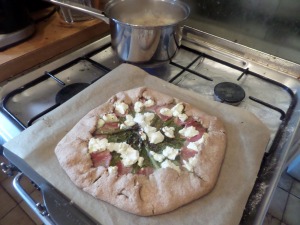 This gets served with some boiled potatoes.

Despite the large amount of sourdough starter the pastry was surprisingly pastry like! And of course with goats cheese and bacon it was delicious.

The sweet filling is going to be from the garden where I’m raiding the strawberries. 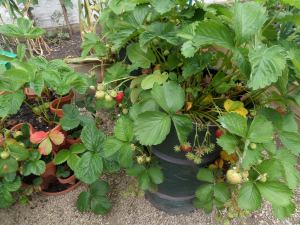 And the rhubarb (in which there is a cat hiding). 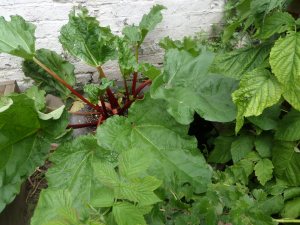 I’ll pre-bake the fruit in sugar and a little salt to remove some of the liquid before using it in the gallete.

For the gallete I’ll sprinkle with demerara sugar and flaked almonds.

Despite the sugar during the pre-baking, and the sugar on the gallete, this was surprisingly tart, probably due to the sour pastry. We agreed it would have benefitted from a layer of jam before the fruit went on.

It was quite fun using sourdough to make pastry, and the galletes were tasty, but to be honest I think they’d have been better with a nice short pastry, rather than the chewier pastry you get from adding glutenous sourdough starter to the dough.

Check out what the rest of the Sourdough Surprises team did this month!