We had this as a breakfast at Soph’s breakfast marathon fundraiser. I say we… Soph was running the marathon of course! So it’s only fair that I introduce Soph how good this is – assuming the version I do is as good as we had on marathon day!

The recipe I’l following is from BBC Good Food. Except I’m not buying ready-made curry paste – it’s just spices we’ve got lying around with garlic, ginger, oil, vinegar & tomato purée. One slight issues was the only dried chilli we had lying around was a ghost chilli – so things might be a little hot!

Things start with boiling up rice, then caramelising onions, then adding chopped garlic. 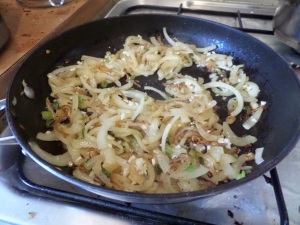 Then spices and coconut milk to reduce down a bit.

The dish is assembled in layers: rice, peas, fish, season, sauce, repeat. Due to things lying around in the fridge we’ve added from squid and salmon to the haddock and prawns in the recipe.

The top layer is rice, with butter dotted on top. 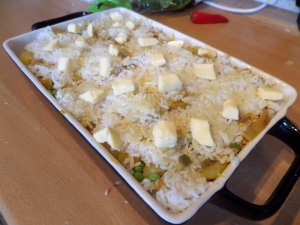 Then it’s into a 180C fan oven for 45 minutes. While that’s cooking it’s time for hard boiled eggs and lemon slices.

After baking the top has crisped up. 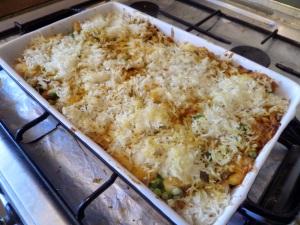 The crispy top gets forked into the dish, then it’s topped with coriander and red chilli slices.

Then it’s served up! 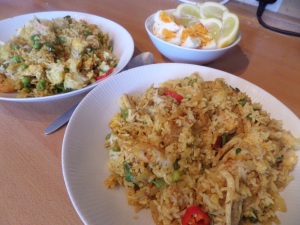 It was pretty spicy! But the hottest part was the sliced fresh chillies, so the paste didn’t get too overpowered by the ghost chilli, but it did add a nice fruity background to the spice.

We both really liked this, and I think we’ll be doing it again as a ‘using up leftovers’ dish, as it would work with most things.

One thought on “Kedgeree Biryani”