Bank holiday weekend almost guarantees a wet Monday… but that’s not going to stop our first BBQ of the year. Very little will stop us getting to eat ribs when we’re looking forward to them!

The rib recipe is, unsurprisingly, from Cook’s Country, along with their recipe for BBQ sauce.

The ribs start on the Saturday, two days before the BBQ, to get a really good seasoning from the salt & spice rub. Once rubbed they get wrapped in cling film and popped in the fridge.

On BBQ day the ribs first get smoked on the BBQ. Small amount of coals on one side, rubbed ribs on the other.

Then cover with foil, smoke for an hour, turn, smoke for another hour. Picture shoes the lid off, not that a closed BBQ shows much more than this… Anyway the vents above and below are both half open, with the lid vents placed on the opposite side to the coals, so the smoke is drawn over the ribs. 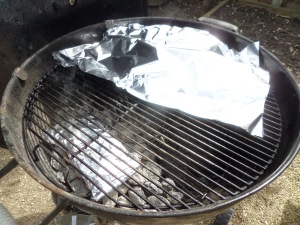 While they’re smoking I prep veg skewers with halloumi.

Then they get finished in a low oven, with lots of BBQ sauce both before and after cooking.

While the ribs are in the oven we’ll use the BBQ to do the veg skewers with halloumi, plus sweetcorn that’s been microwaved gets a finish on the BBQ.

Also on the BBQ is the unusual chimney bread I’ve done before. 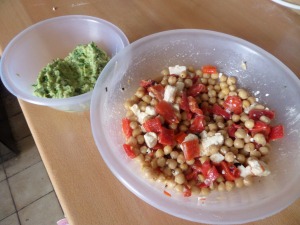 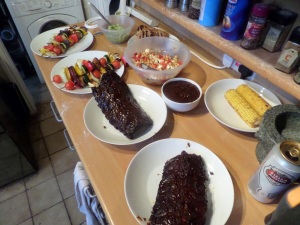 So… we still have a lot of the salads left over. They’ll get used up during the week. Mean time… we’re full of ribs!