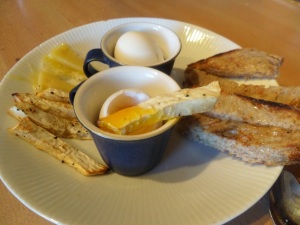 A recent post on Reddit’s /r/sourdough asked about using two starters in one loaf.

So a regular sourdough loaf, but with 100g of rye sourdough starter added to the mix, which if nothing else will up the hydration level due to its 200% hydration.

I was going to try this for one of my xmas loaves, but a need has arisen for plain bread this weekend…

I got some duck eggs from the local food assembly, and I didn’t quite know what to do with them. Thankfully the French couple that run the food assembly posted an meal with soft-boiled eggs with celeriac wedges to dip, and I also got celeriac from them. The details are somewhere in this discussion list… but I can’t link directly :(

Anyway: great dipping idea, but apparently these Frenchies don’t know about dipping soldiers! I tried to explain, but I wasn’t getting anywhere, so I’m going to have to make some to demonstrate.

Makes double starter loaf. Looks damned good… I have high hopes for this. 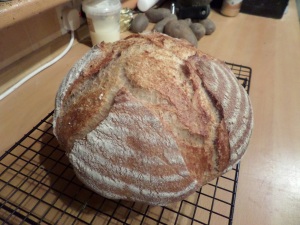 High hopes were well founded: the crumb is great!

And while I’m making things to dip in eggs, I picked up some Tito cheese from the food assembly, which is like halloumi apparently, so I’m going to griddle some strips of that to dip as well. 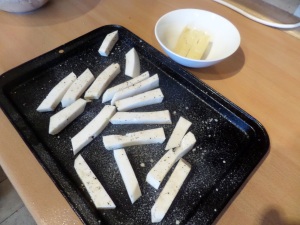 So the moment of truth… how are the yolks?

Woohoo! Lovely runny yolks, and it works really well with all the dippers.

The taste of the bread was great. I think this trick of adding rye starter to the mix really works.

One thought on “Double Starter Soldiers”