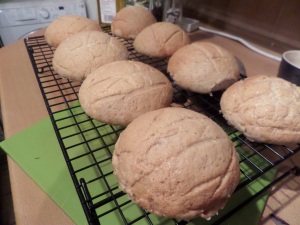 The recipe I’ll roughly be following is from Cooking and Me. I’ll be using my standard enriched sourdough recipe for the bread, and following the given cookie dough recipe as given, but with some xmassy spices for that xmassy feel, which when converted from cups and cubits gives me:

Mix the dry stuff together. Cream butter and sugar, beat in the egg & vanilla, fold in the dry stuff, chill until needed.

This should be enough for 10 small buns, but eight is easier for dividing and baking, so that’s what I’m going for. So eight balls of bread dough get covered in rolled-out cookie dough.

That doesn’t work: the sugar doesn’t stick. So I brushed with buttermilk (as I had some real stuff from the Food Assembly that needed using up) and sprinkled with sugar.

After the final proof it’s into a 160C fan oven for 15-20 minutes (maybe a little longer as I’m doing slightly bigger buns) until the tops are nicely golden coloured, and the bread hits 90C inside. In the end it was 35 minutes, including turning, to try and get some colour on all the buns.

Then of course they have to cool… 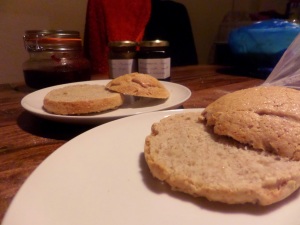 We’ll eat with jams. Homemade and from the local Food Assembly. 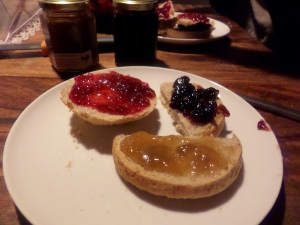 Strange but delicious! It doesn’t taste like two things mashed together, just a bread with a really sweet, crispy crust.

One thought on “Xmas Melonpan”