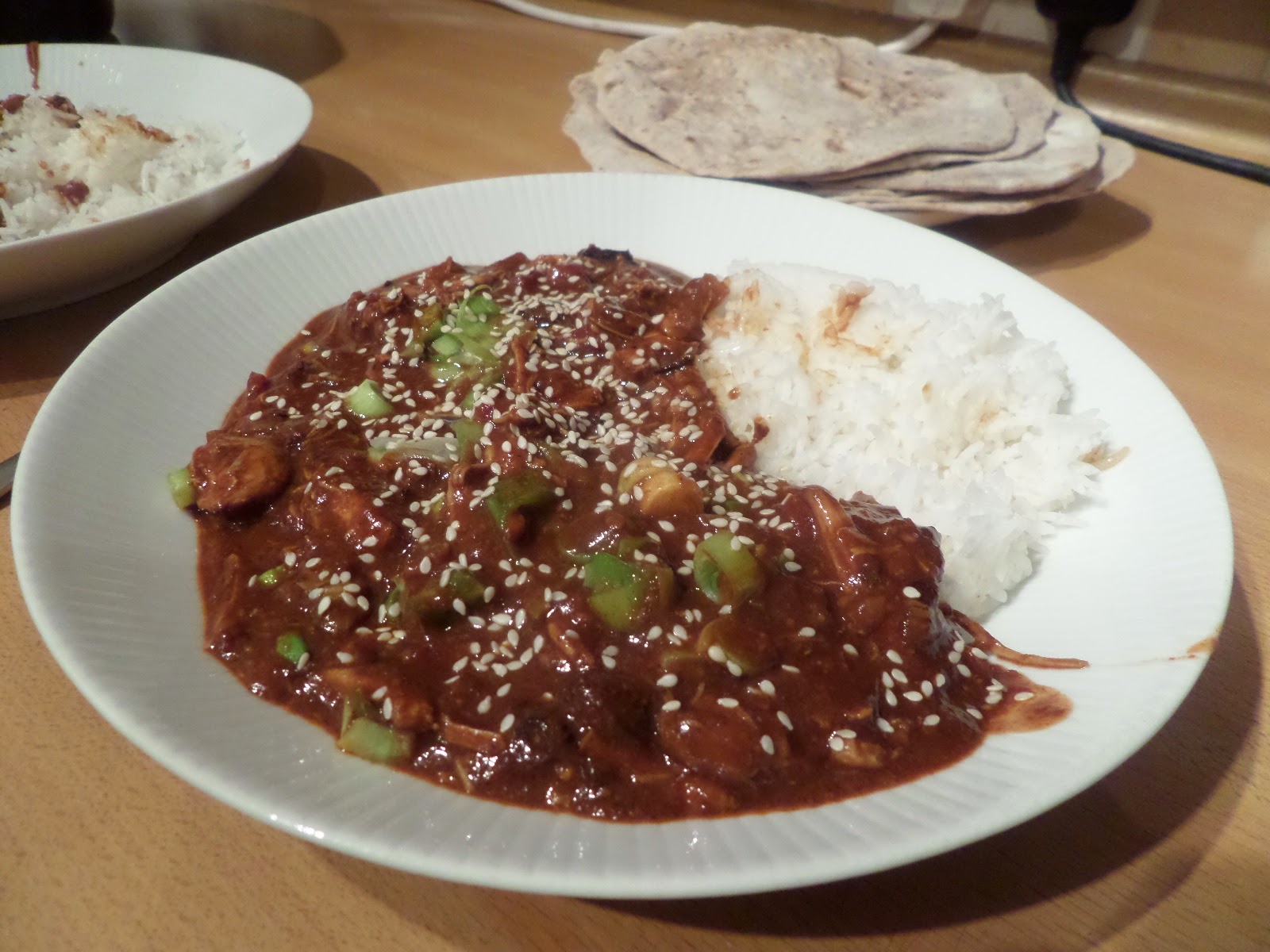 We’re off to the BBC Good Food Exhibition this weekend, and we won’t want to cook after we get back, so I’m going to break out the slow cooker to cook something for us while we’re out. We’ve got some chicken thighs in the freezer so this chilli chicken mole from ATK’s Slow Cooker Revolution (p134) sounds like a perfect way to use them up. It takes 4-6 hours in the slow cooker, which isn’t long enough for the ‘make before you go to work’ trick people like to do with slow cookers, but is perfect for our trip this weekend.

To go with it we’re having rice and tortillas. We agreed that we like the texture of wheat tortillas, but the flavour of corn ones. So we’re trying adding some masa harina to the wheat mix to see what happens. I started by replacing 50g (out of 250g) of wheat flour with masa harina (blue stuff… as it needs using up). I ended up adding an extra tablespoon or so of wheat flour while it was mixing to get the right sort of consistency.

Then they got dry fried up, being careful to do them slightly under as they’ll be going in the oven later to warm up, and we don’t want them crisping up too much. 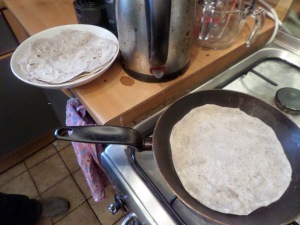 Onions, garlic and spices, plus cocoa powder, got microwaved to pre-cook the onions and bloom the spices, and this got added to canned tomatoes and chicken stock, and the chicken thighs themselves got trimmed of fat and seasoned. 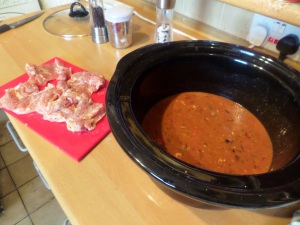 After a lunch of spit-roast boar with stuffing and apple sauce in buns, plus tiffin brownies for pudding at the BBC Good Food show (and watching Michel Roux Jr cook an amazing choux pastry scrambled egg and chicken breakfast that you’ll be seeing soon on this blog!) we returned home six hours later ready to shred the chicken and warm the tortillas and cook up some free microwave rice we got in our show goody bag. 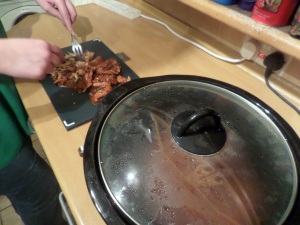 The shredded chicken got added back to the pot, which didn’t need any fat skimming thanks to trimming the chicken earlier. The last of the spring onions form the garden got chopped up and added to warm through, before serving with sesame seeds on top.

OK… I may have added a little too much chilli powder. And maybe too many chipotles in adobe. Not too hot to eat, but probably more than was supposed to be in there. Thankfully it was still a really rich and deep sauce, and while you couldn’t taste the cocoa powder, you could tell it was there… if that makes sense.

The corn/wheat tortillas worked really well too. Good corn taste, but still nice and large and flexible. Worth doing again.

The leftovers are getting frozen, so we’ll have those as burritos or maybe even on waffles at some point in the future.

If I did it again… apart from a little less chilli, I might also add some extra veg to bulk it out a bit. Maybe bell peppers?