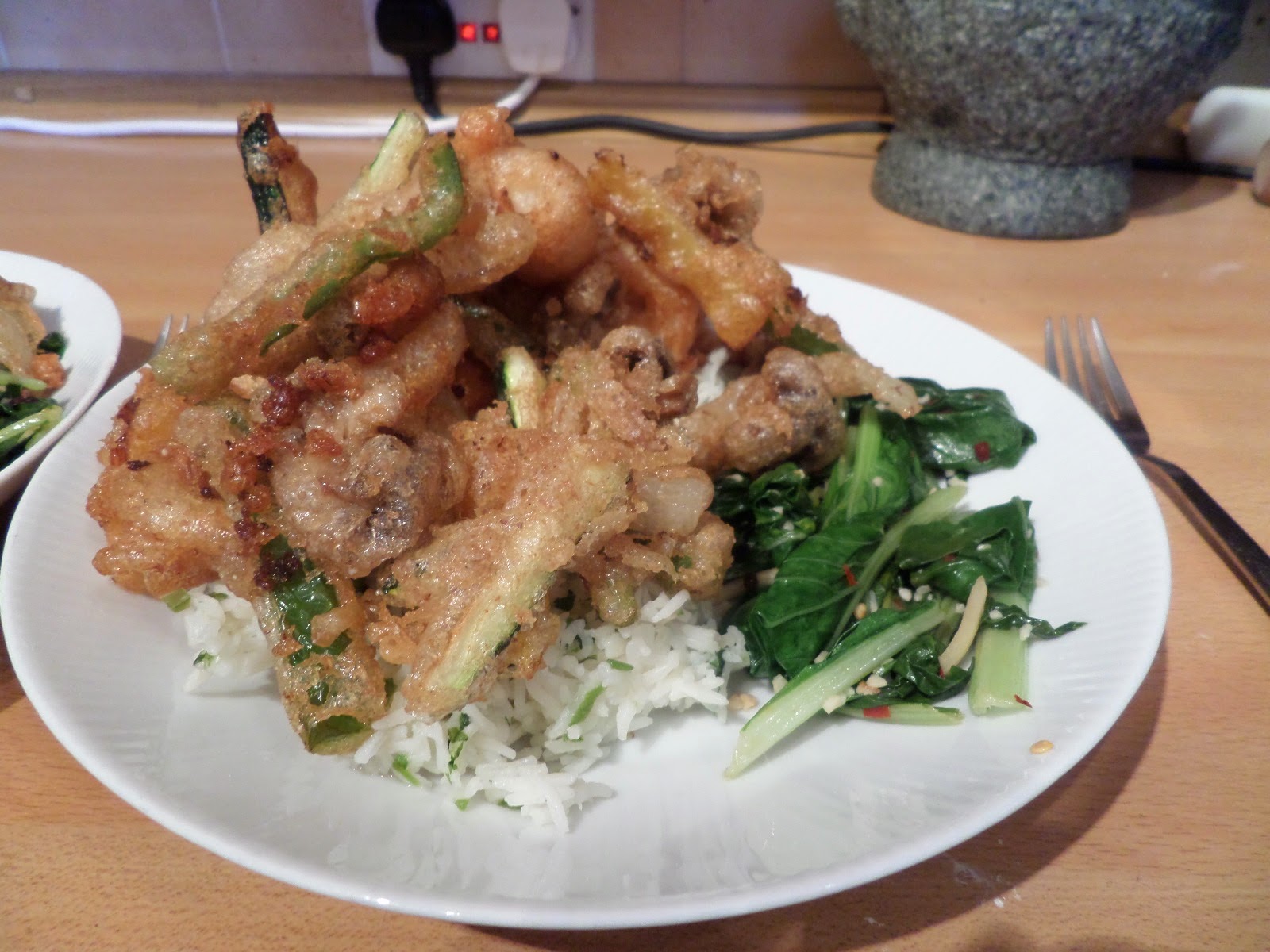 June’s Sourdough Surprise is… frying things! The examples on the Pinspiration board include onion rings, fried chicken and tempura okra.

As we’re still on pre-holiday diets, we’re going to go with tempura. Unfortunately the Pin’d tempura okra didn’t come with a recipe, just a picture. Thankfully a quick Google found me this sourdough tempura recipe at Maggies Muddies. Then, of course, I checked BBC Good Food and Cook’s Illustrated for their basic tempura recipes.

Both of these us sparkling water rather than still, so I’ll do the same. Cook’s Illustrated also uses an egg, as do most other recipes I’ve found, so I’ll use one as well.

Interestingly Cook’s Illustrated uses half vodka half water for the liquid. This is done for the same reason as in their pastry: to add liquid that isn’t water, to reduce the amount of gluten that forms and give a crisper result. Given I’m going to be using gluten-laden starter, I figure this could help my batter.

I also wonder if I could use rice wine rather than vodka for a more Asian ingredient. However rice wine is only around 13% alcohol, compared to 40% in vodka. I figure I can use a mixture to get the best of both. Finally why not go beer batter, and get some more alcohol in, by replacing sparkling water with beer, which keeps the sparkles.

Both BBC and CI use less cornflour than the sourdough recipe. As I’m fighting gluten in the starter, it makes sense to use more cornflour, so I’ll still with those ratios.

The sourdough and BBC recipes use chemical leaveners, however I like to avoid them when using sourdough, so I’m going to go without, and anyway Cook’s Illustrated goes without, so it can’t be far wrong!

Finally it strikes me that one obvious way to reduce gluten is to use my rye starter, instead of my Sodo starter. And then… why not use rye flour instead of wheat flour all the way through? So… processing all that I come up with:

The batter is only made up once the oil is ready for frying. So we mix the wet and dry ingredients separately in advance, and chill the wet stuff (it’s rather frothy).

While the oil heats up, and mix together as the oil approaches 200C.

Once the oil gets over 200C we dip veg (courgette/zucchini, onion, pepper, mushrooms) and prawns in batter and start frying, cooking each piece for 2-3 minutes.

Between batches we’ll wait for the oil to get back over 200C before frying the next batch.

Cook’s Illustrated has a good-looking ginger-soy dipping sauce, and checking around the internet I didn’t find anything I liked better, so I’m going with their version. Well with added garlic and a bit of chilli of course!

This just gets mixed up ahead of time.

We served it with bok choi (from the garden) fried off in sesame oil, and rice with chillies & coriander. 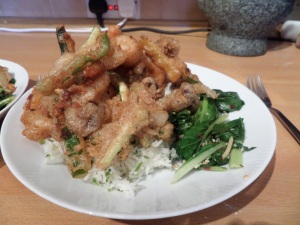 It was really crispy and light, just like tempura is supposed to be. It even had that proper look where the veg isn’t totally covered in batter. The dipping sauce works perfectly with the tempura, and the batter was still crispy after being dipped. We are extremely happy with the result!

Also worth noting that bok choi in sesame oil works really well. It really soaks up the flavour from the oil.

We hardly ever deep fry, but this was definitely worth it, and if we ever want to do tempura again we’ll certainly use this rye sourdough version rather than going for a more traditional recipe.

Check out the other Sourdough Surprises…