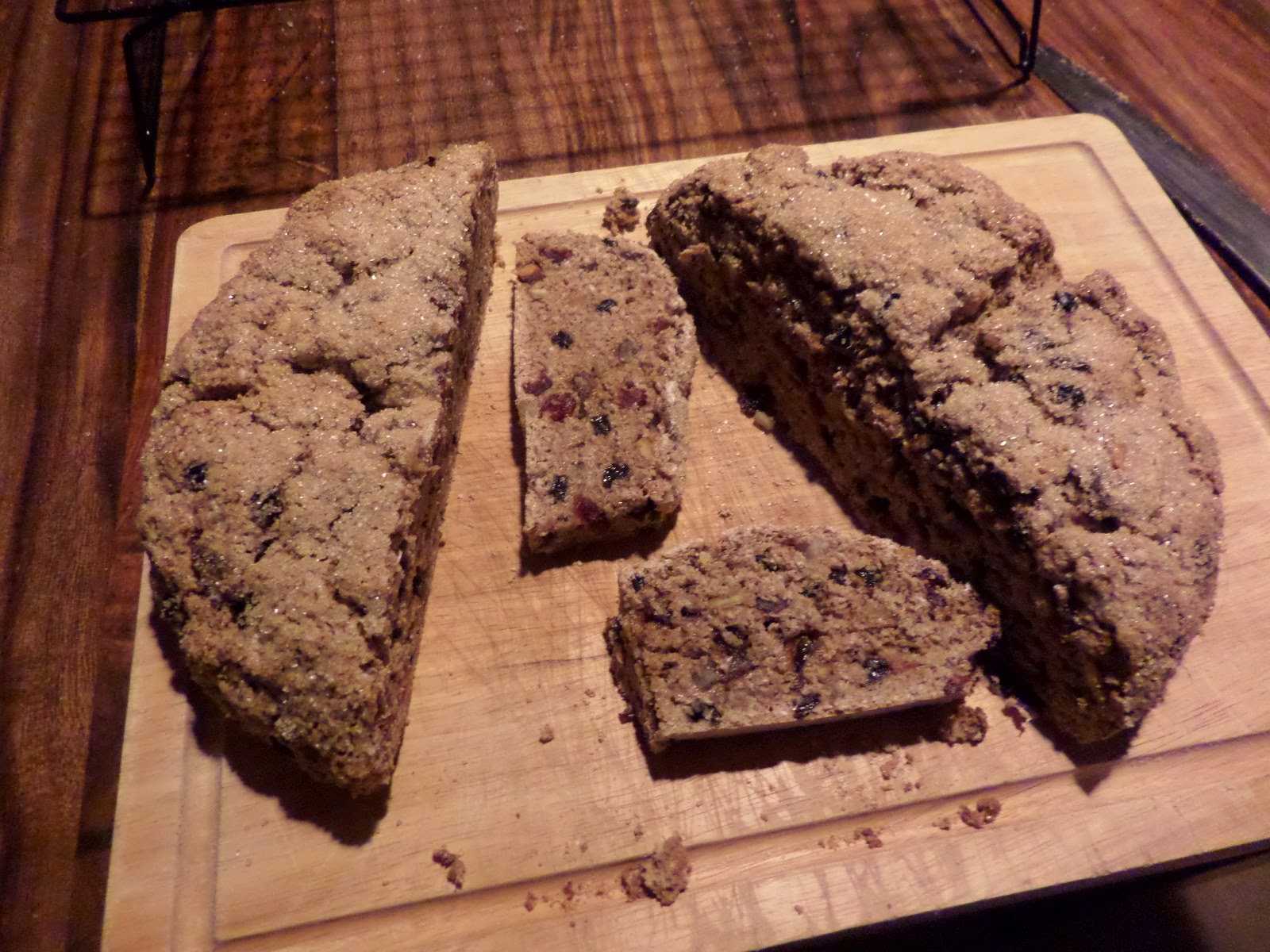 Well this is all very odd: using sourdough starter in a bread that doesn’t use yeast! But that’s what this month’s Sourdough Surprise is: sourdough soda bread. So it’s more about using the flavour than the yeast this month: so I’ll be using my rye starter (despite the fact that a Sodo Soda Bread would have been a good name!).

So I need something that works well with my rye flavour. I’ve been thinking of doing a cinnamon & raisin loaf for a while, so I’m going to run with that flavour. However I’ll use mixed dried fruit as that’s what I’ve got lying around.

Talking about using things up, as I don’t need strong bread flour to provide gluten for my rye starter, I’m going to use up whatever weird and wonderful flours I’ve got open that need using up.

Most of the sourdough soda breads listed in the inspirational recipes seem to use a cup of starter with a pretty standard soda bread recipe. However I’ll need to adjust to take account of my very watery starter… so I’m going to go with this BBC Good Food recipe for fruit & spice recipe as a base and add in my starter.

I won’t know exactly what flours or dried fruit I’ll use until nearer the time, but I can plan the amounts of ingredients I’ll use and work on reducing the liquids to cope with my watery starter. The only real volume of liquid is the buttermilk, which of course is needed to react with the bicarbonate of soda (baking soda) to make the bead rise. The yeast might offset some of that… and the sugar will react to an extent… but I think I’ll add some baking powder just to be safe! Hopefully that will let me drop 200ml of the buttermilk (250ml instead of 450ml, dropping nearly a cup) to allow me to add my cup of starter.

So… putting everything together I get:

Making it seems dead easy compared to normal bread! The butter is cut into the oats in the food processor, then gets mixed with all the other dry ingredients. Then the buttermilk and starter are mixed in, then you bring the dough together by hand, form into a ball and place on a lined baking tray. The demerara sugar gets pressed onto the top, and you cut a cross on top before baking at 180C fan, on a bread stone, for 30-35 minutes until crusty on the outside.

So… now baking day is here I just need to put that into practice! I raided the baking cupboards for my flours and found:

As for the dried fruit: 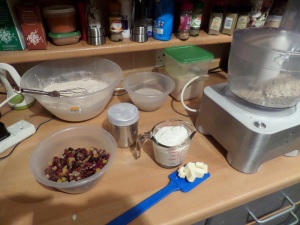 Then make and shape the dough: 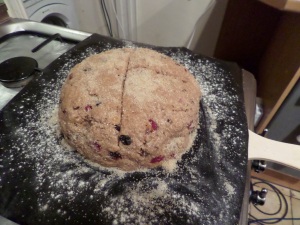 And bake – how easy is that!

After 30 minutes I tried taking it out to check it… I should have checked the crust first… it nearly broke pulling it off the stone! Guess that’s the rye starter doing its thing. (I’m also blaming the rye starter, and lack of buttermilk, for it not poofing up like normal soda bread). By the time I got it back in and shut the door I’d lost a lot of heat, os I decided to give it an extra 10 minutes. 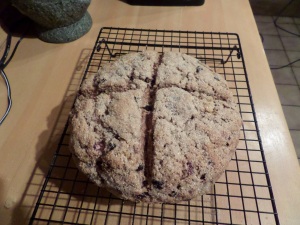 Well it was crusty on top, and sort of hollow sounding when topped on the bottom… but it still felt not quite done to me… so in for another 5 minutes, for the sake of the rye sourdough!

It didn’t look or feel much different after the extra 5 minutes… and I decided to leave it there, and hope it firmed up while cooling. 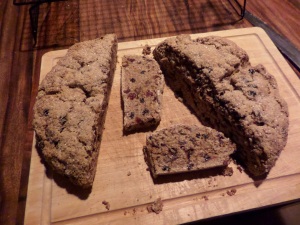 So… it’s a bit cakey. Although I prefer Soph’s description: it’s like a hot cross bun :) The flavour is great: spicy and fruity, and it goes really well with the lemon curd SOph made last week. It might not be very soda-bready… but it’s a great tea-cake!

Check out the other sourdough soda breads made for Sourdough Surprises!