When I did these “biscakes” the first time the bottom biscuit/cookie part wasn’t crispy or crunchy as I’d wanted it. So this time I’m going to bake the base for 15 minutes at 160C fan before adding the jam and cake topping. Plus I’ve got more coconut oil, so I don’t need to use any butter this time.

After 15 minutes blind baking the biscuit bases had a nice colour.

However… they didn’t feel like they were going to crisp up properly, so I turned the oven down to 120C fan and gave them another 30 minutes.

They don’t look much different after the extra time, although the different lighting in the picture might give you a different impression. They do however feel a little firmer, so I’m hoping after cooling for an hour they’ll be nice and crisp.

If they’re not… I’ll have to look into a different shortbread recipe for the base: maybe one that cuts cold butter into the flour rather than creaming… But for now we’re going with what we’ve got!

Oh… while I’m making future plans: I forgot how much extra biscuit mix I had. Next time I must reduce the amount, probably by a third.

Anyway the jam and cake part goes on top, then it’s 20 mins at 160C fan before checking… and they were done! 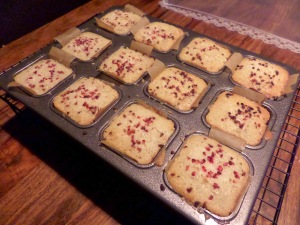 After cooling… SUCCESS! The biscuit base is properly crispy :) Plus with the extra coconut oil they’re even more coconut-y!

One thought on “Biscakes v2”