I checked my list of pudding ideas this week, and was uninspired. Then Soph happened to mention she’d like to do madeleines again, and I thought: why not have madeleines for pudding!

I checked my list of madeleine ideas (yes – I have a huge spreadsheet that has a tab just for madeleines… doesn’t everyone!?). Once again I was uninspired… Top of the list was apricot and pistachio, and I’ve just done that flavour combination for friands.

So I headed to the kitchen and looked at what open packets of things we’ve got lying around needing to use up. Turns out we have a couple of open packets of desiccated coconut, and suddenly I’m inspired: coconut & lime madeleines! We even have coconut oil and coconut flour that needs using up!

Hmm… if I substitute coconut flour I’ll be doing gluten free baking. This whole gluten free fad annoys me. If you’ve got Coeliac disease fair enough you need to be gluten free as even a small amount of gluten is a big problem, but that’s very few people. There may also be non-Coeliac intolerances, although the evidence for this is weak and vague. The way it’s talked about in the press and on many cooking shows and blogs gives the impression that going gluten free is beneficial to everyone, but there’s just no evidence that avoiding gluten has any health benefits.

Anyway, back to the recipe…

A few Googles later and I know that coconut oil can be substituted 1:1 for butter: nice and simple. Coconut flour is more complicated. Some people say 1:1 by volume, some 1/4 to 1/3 by volume, some 1:1 by… weight given it’s .co.uk…? Also it needs extra liquid/eggs: specifically an extra egg per 1/4 cup of flour! Extra liquid as coconut flour is super-absorbent I get, but eggs to compensate for lack of gluten for structure… erm… wouldn’t you generally use a low protein flour for a cake mix and try to avoid gluten formation? Clearly this is going to be complicated…

On the positive front: more liquid means I have no problem adding lime juice. Given how dense coconut flour is, I’m going to go for 1:1 by weight, assuming that the 1/4 by volume is due to density.

Now for the recipe. I started by consulting the book I got Soph for Xmas with the madeleine tin: We Love Madeleines. Oh dear… it’s all over the place! The recipe for 24 madeleines has less ingredients than the basic recipe for 12 madeleines…

So I’m going back to the The Little Paris Kitchen recipe we used originally. This made 24, or two trays, so let’s start by halving it to make the 12 we need:

Now let’s round liquids up, and do the substitutions…

Sounds good right? Except of course there’s no desiccated coconut… which is what I wanted to use up in the first place! Sprinkling some on top isn’t going to use up much, so I need to add some to the batter. Plus I’m not sure I’ve added enough eggs for the coconut flour. So the final recipe is:

Mix the the coconut flour, baking powder & desiccated coconut. Whisk the eggs and sugar until they go pale and frothy, then add milk, honey and lime juice & zest.  AKA mix dry and liquid separately… 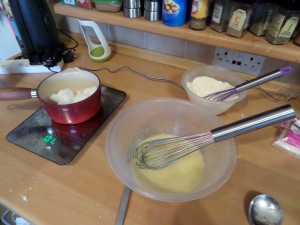 Melt the coconut oil on the hob and leave to cool, then mix into the liquid, then fold in the dry ingredients.

As warned, it much drier than the normal liquid madeleine mix. Maybe even more eggs and lime juice were needed? Maybe… but I’m sticking to my recipe. Spray the madeleines tray with oil, dust in regular flour, and sprinkle extra desiccated coconut on top.

Then as planned previously, we’ll bake at 170C fan for 10 minutes. There didn’t look done after 10, so we left in for another couple of minutes… then a few more. About 15 minutes in total. 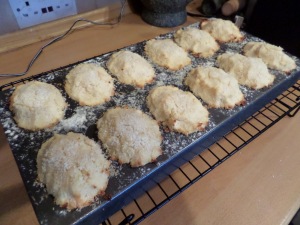 After 5 minutes in the tin we transferred to the cooling rack.

They taste great. Not much like a madeleine… but great coconut flavour, unsurprisingly! They are a bit fall-aparty, I think an extra egg would have helped.