Right: it’s about time I tried making a soufflé! They are notoriously tricky to get right, so I sought out a couple of recipes from places I trust.

Cook’s Illustrated’s has a chocolate soufflé recipe, and I trust them to have tested their recipes properly. However I was worried that adding the pistachios could cause problems. That led me to James Martin’s recipe which is pistachio & chocolate. At that point I just got confused as they’re using such different ingredients! At least the methods seem similar: make some sort of custard and fold into stiff egg whites.

I decided to go with James martin’s recipe as it seemed a more classic soufflé recipe. I’m sure ATK’s recipe is perfect every time… but as I’ve never even tried a soufflé before, let alone made one, I wanted to go the classic route.

So we made up mixture as instructed, except we ground the pistachios, and put two tbsp in the mix, rather than putting 1 chopped tbsp in.

Woohoo: they rose! Then we sprinkled a little of the leftover ground pistachios on top to serve. 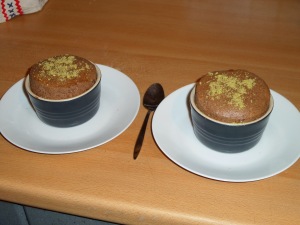 Soph assures me that these taste like proper soufflés, AKA delicious hot chocolate mousse :)

Knowing nothing about what a soufflé should taste like I was hugely happy with the hot, light, fluffy pudding. And I was pretty chuffed I’d made this notoriously tricky pudding!

One thought on “Chocolate & Pistachio Soufflé”