It’s Stir Fryday! Did you see what I did there? Anyway…

Instead of a takeaway Chinese on a Friday, this week we’re doing a much healthier one ourselves. We’re sort of basing it on this BBC Food recipe for flavour, but using the veg we have: onions, peppers, mushrooms, chillies. And of course much more garlic and chilli flakes :) 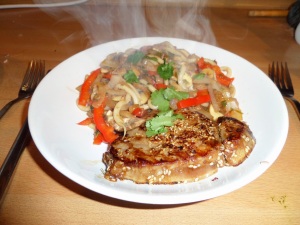 It tasted amazing! The tuna was nicely seared on the outside and very rare on the inside, and the marinade really complimented its flavour. The noodles and veg, using similar flavours, really worked well with it. Plus: it’s all really healthy. Winning.