We have an internal Wiki at work, and every week I write a blog on it about the week’s achievements. Last week I asked for requests for my weekly bakes, and I’ve now got a list of requests (which as a product manager I’ve put into a planning spreadsheet and stack-ranked them!).

One request was for cherry chocolate brownies. As cherries are in season at the moment, the the requestor is off on holiday for a month soon, I decided to go with this request.

I was pleased to find that ATK’s Comfort Food Makeovers had a reduced calorie version: halving the calories per piece from 220 to 120 kcals! I’m adding cherries to the recipe, but that won’t add many calories, plus I’ll be cutting into 20 pieces instead of 16, so it’ll be under 100 kcals per piece!

I’m not going to give the full recipe details here: if I keep doing that I’ll have reproduced the entire Comfort Food book, which isn’t exactly fair.

So, it all starts with pitting cherries. As you can see I’ve bought myself a huge 2kg box of them from Borough Market, for just £6.50 – bargain! 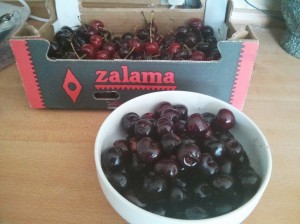 I took 20 nice looking cherry halves for the top of the brownies, the rest I cut into a selection of halves and quarters. 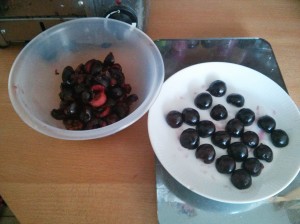 Then butter and chocolate gets melted together in the microwave. As this is a makeover, the amounts have been reduced and replaced with healthier ingredients, as we’ll see later. 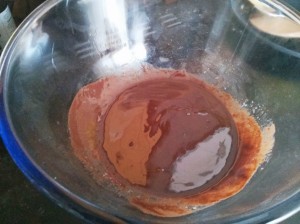 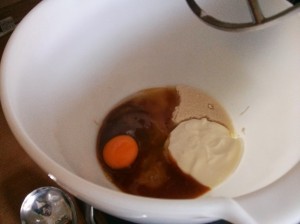 This gets whisked up with the melted chocolate and butter. 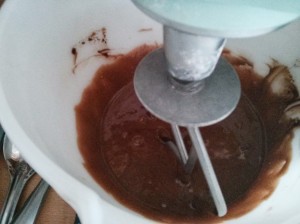 The dry ingredients are flour, cocoa powder, salt and baking powder, which get mixed together. 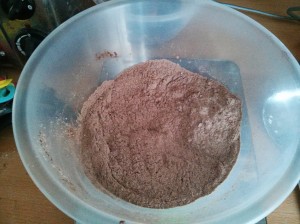 This gets mixed into the liquids, and once combined the cherries are added and gently mixed in. I forgot to flour the cherries… so chances are they’ll all be at the bottom of the brownie :(

This goes into a tin lined with foil (to help take it out after) which gets sprayed with oil. 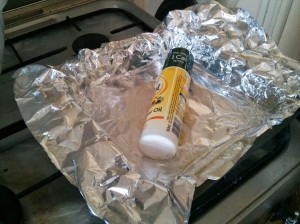 The mixture then gets poured in, and the 20 cherry halves put on top. Unfortunately I forgot to take a picture at this stage. And despite cleaning the oven door earlier I couldn’t get a good picture. 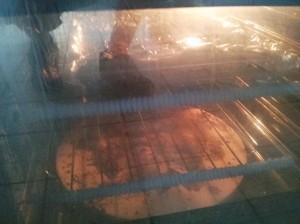 This cooked 10 mins at 160c fan, then got turned and had another 10 mins before I checked with a skewer, but it was still liquid. After 5 more minutes (a total of 25 mins) it looked good: a few crumbs on the skewer (it doesn’t want to be completely dry for brownies apparently). 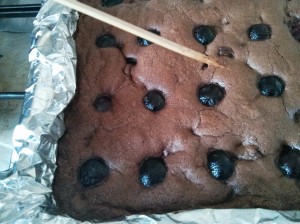 This then went on a cooling rack in the tray to completely cool, which takes two hours apparently! So, cloche on, and wait… 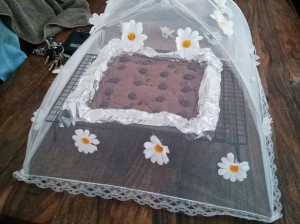 After cooling it removed from the tin pretty well. 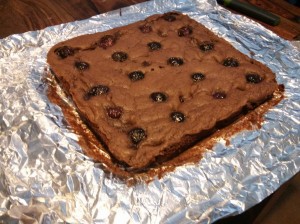 Cutting into pieces wasn’t so easy. I tried a few knives before finding a long, sharp, non-serrated blade worked best. 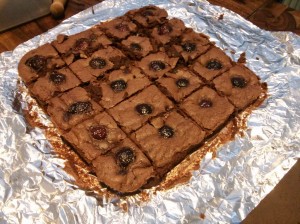 It tastes great! You’d never know it was reduced calorie. So after lots of offcuts and a couple of pieces each, it was quickly boxed up for work tomorrow. It might be half the calories of regular brownies… but that doesn’t mean we can eat half a tray each! 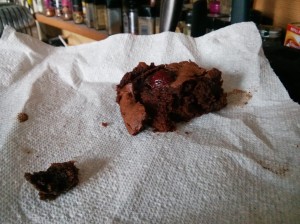