Soph’s away this week so I planned on doing Fennel seed Rye Sourdough again this week (as she doesn’t like aniseed flavours). However while I was cleaning out the kitchen I found we had lots of sweet potato that needed using up. A quick Google and I found recipes for sweet potato bread with cinnamon and ginger. Checking my Flavor Bible I found that Fennel seed wasn’t a bad match for these flavours, so today’s bread is sweet potato, cinnamon, ginger and Fennel seeds.

So it all starts with the starter that’s been going overnight. As you can see it looks nice and bubbly and alive :)

Before anything else I take some back for the fridge. As I’m planning on giving my mum a starter when I visit I’m putting about 70g back rather than the usual 60g, so my fridge starter is getting big enough to give 50g away. 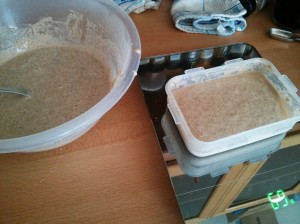 The 2 tsp of Fennel seeds I toast in a dry frying pan.

Then with the ginger I take the skin off using a teaspoon: it’s surprisingly easy using this trick!

Then chop up the ginger.

The sweet potato gets peeled, then chopped up and put in a bowl with a splash of water, covered, and then microwaved until soft. This took about 6 minutes for me.

Then the sweet potato is mashed.

Then 200g of wholemeal bread flour, because I’ve got some lying around. All Rye can be very dense, so I always mix it up a bit. 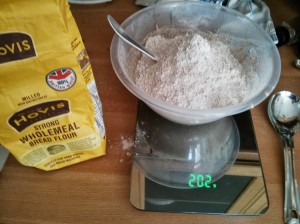 Normally the bread uses 200ml of water, so I’m using a similar volume of sweet potato instead.

This all goes in the bowl along with 1tsp of cinnamon and 1 tsp of salt.

This all gets mixed up. It’s much thicker than usual due to the sweet potato… let’s hope it’s OK! 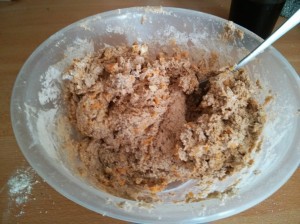 The tin gets sprayed with oil. 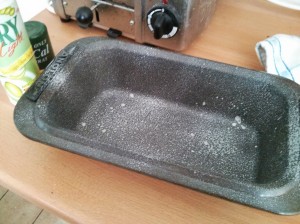 Then the mix goes in. 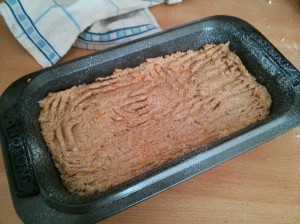 And it gets covered in a ‘fun stuff’ mix of cereals, nuts and seeds I found at Borough Market last week. I pushed the mix into the top so hopefully it won’t fall off after cooking… 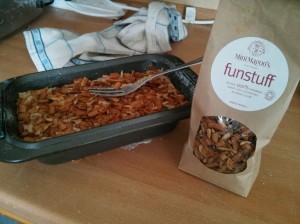 This is now ready to prove.

So into a oil sprayed plastic bag for about an hour.

So first thing I noticed when I took it out… the Fun Stuff had burnt :( I guess cereals don’t stand the heat as well as seeds.

Thankfully quite a few of the burnt parts fell off in removing from the tin.

However once sliced up… MMMMMM that’s some tasty bread! The burnt top obviously gives a bitter taste, but if you scrape those off you’re left with a really hearty spicy bread. I think it’s my best yet! The aniseed flavour is really strong, and while that’s great for me you might want to tone it down to a single teaspoon, and you might also consider using two teaspoons of cinnamon. 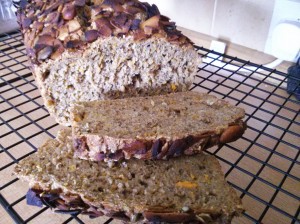