The nice weather this weekend has made me want to barbecue. To try and keep things healthy I’m going for these turkey and courgette koftas from BBC Good Food.

So I mixed up the courgettes and turkey mince, and tried to put on the skewers.

Despite our lovely thick skewers, there was no way this was staying on. I added an egg, and some flour, and followed the tip from the adana kebabs from Cook’s Country I beat them in the mixer. 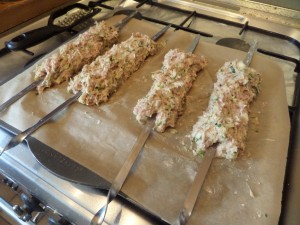 Better… but I’m still not convinced they’re going to stay on. I’ve popped them in the fridge, and we’ll see how it goes. They might end up becoming burgers!

I’m also doing veg skewers. Soph suggested putting some pepperdews on them – great idea! I checked before doing the weekly shop and we already had some. What I didn’t realise was that they are the cheese stuffed type… well too late now, we’ll just have to see how that works!

They go in the fridge, as does a mint yogurt and creme fraiche dip.

Recently I realised I’ve never made coleslaw… so I’ve also made some of Cook’s Country’s creamy coleslaw. 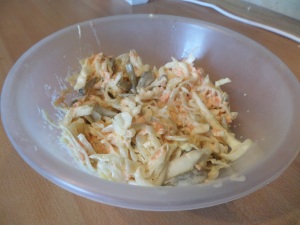 Finally I’m doing sourdough flatbread on the BBQ, with cumin seeds and turmeric for both flavour and colour.

Oh and we’ll be adding some of our pickles, including pickled chillies.

These chimneys are amazing. No problem lighting a BBQ again!

First up is the bread. A little charred… but I think I got away with it!

Then it’s the kebabs… which seemed solid enough to try grilling directly.

With the help of a spatula, the kebabs stayed together! 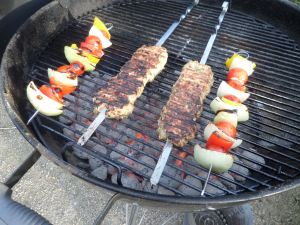 Then it’s just plating up all the food. 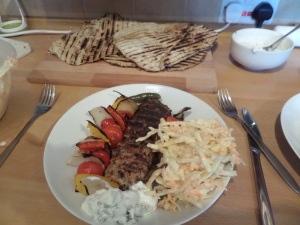 And yeah… it’s all delicious. The bread was nicely spiced, and after cooking didn’t look so radioactive as it did as a dough! The kebabs were really tasty and juicy thanks to the courgette, and worked really well with the mint dip. The coleslaw was nice and crunchy, with a hint of heat from the mustard.

All around: winning BBQ. Well of course it was: it’s BBQ kebabs with flatbreads and dips… but it’s also entirely healthful, and not terrible on the calorie front!