This month’s Sourdough Surprises is “biscuits”. Not real biscuits: American biscuits, which are some bizarre sort of take on a nice scone that Americans eat with fried chicken, instead of cream and jam… All very odd!

My first thought was do do make actual biscuits (ie US cookies), as I’ve been tempted to try some of these for a while. But that didn’t seem in the spirit of things.

Then I wondered about making scones, basically the UK equivalent of a the US biscuit, although generally used in a sweet way with jam and clotted cream rather than the savoury US style.

Then it occurred to me that I should take the opportunity to try this fried chicken and biscuits that’s so popular in the US South.

A little investigation seems to offer two versions: fried chicken on the bone, with biscuits and gravy; or fried chicken off the bone using the biscuit like a burger bun.

The decision here is simple, as to be honest I’ve got no idea how you’d go about eating chicken on the bone with biscuits and gravy. What do you do, tear off bits of chicken and bits of biscuit and eat together? Or eat separately? No idea…

So off the bone inside the biscuit-as-burger bun it is. Luckily good old Cook’s Country a recipe for fried chicken sandwiches which I can use for this. However… they also have a tantalising Nashville extra-hot fried chicken, but that’s on the bone. So I’m going to mix-and-match and do the Nashville flavour with the chicken sandwich method.

Back to the biscuits… Not being American I know little about these “biscuits”, so I’m happy to stick to the basic recipe provided by The Gingered Whisk.

So it’s decided: Nashville extra-hot fried chicken, using the biscuits like burger buns it is.

Except… that picture of scones with clotted cream and jam above is calling to me. Well: no reason not to do both! I’ll have my biscuit and eat it, if you will ;)

So I’m going to follow this scone recipe from Bakery Bits (who sold me my La Cloche for my regular sourdough loaves!).

Roll out large for chicken sandwiches, rest, and brush with melted butter.

Bake… and be disappointed by how they don’t rise :(

Scones start in a similar way, but with more sugar.

And they get topped with egg.

And they also don’t rise much :(

Chicken has egg added to the flour mix for the coating. 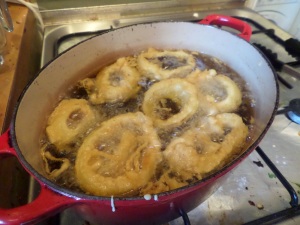 With scones, clotted cream and jam for pudding.

Despite the rich clotted cream scones, and lovely crispy & spicy chicken… the best part was the onions rings: properly crispy in stark contrast to the ones last night.

We’d definitely do this again. I’d pound the chicken to make it even flatter next time, as it really puffs up while cooking. And it could take some extra heat from chillies.

However… I might do it without the sourdough… as I’d prefer things to rise more!

Check out the other great “biscuits” the Sourdough Surprises people have been making!

Leave a Reply to Korena in the Kitchen Cancel reply