So we’ve got two years until the idiots of this country, scared by made up stories of foreigners coming over here on cheap flights to get British passports or benefits or various other things they can’t actually get, vote to withdraw us from the EU.

We should be researching various Commonwealth countries we can emigrate to (because much as we’d love to move to somewhere in Europe, we ain’t going to learn the lingo). Instead we’re making rhubarb mille feuille.

It started when we discovered the cats had snapped off some of the rhubarb, which sent me to the intertubes to see what to do with it. 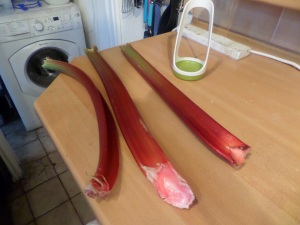 Soph said she was fine with rhubarb and custard… and then this appeared in my news feed: Rhubarb & Custard Mille Feuille. So on a whim: it’s mille feuille time!

I’m following the mille feuille system from my previous one using Leith’s Baking Bable for the puff and creme pat.

So the rhubarb gets sprinkled with sugar, then left to let the sugar do its hydrophilic stuff, before being roasted at 180C fan for 30 minutes.

While that’s cooking the creme pat gets started. 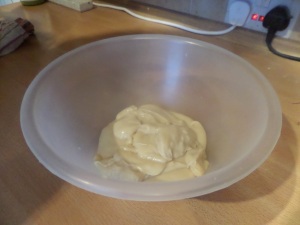 As does the puff pastry. 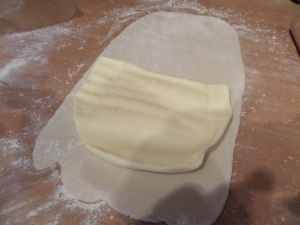 Puff gets rolled out.

Then baked at 180C fan for 30 minutes with a baking tray on top of it to stop it going too puffy. 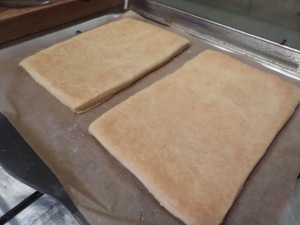 So time to assemble! Stripes of rhubarb and creme pat. 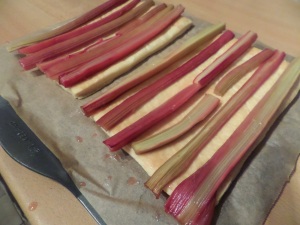 And at this point I realise I really needed a third layer to top it off! Oh well… too late for that now, it’ll just have to be what it is.

Anyway, time to cut and eat!

Despite a lack of proper iced topping, it was delicious!