So these cookies didn’t go perfectly when I did them for Soph’s bake sale, so some changes are needed for doing them again for the Macmillan Coffee Morning‎ on Friday at work. I was going to revert to butter but I’ve decided to persevere with the vegan ones.

Firstly I’ve bought some cocoa that doesn’t have any ‘may contain milk warnings’, so they’re properly vegan this time.

Secondly on Soph’s advice I’ve rebranded them sesame rather than tahini. Apparently people didn’t like the idea of hummus flavoured cookies!

Then it’s on to the main problem of them not setting as well as the butter ones, and not getting a crack. Some observations here:

I assume the water evaporating during baking has two effects: causing the cracks in the cookies, and making them set better as less fat/liquid is left.

So my plan is to use less fat, more cocoa. I considered adding some water to mimic the butter, but I’m worried about making an already runny batter unworkable in terms of forming and rolling the cookies.

So my recipe becomes:

I’m also expecting the cooking time to still be longer. So instead of 16 minutes I’m going to up to 20, turning half way through, and see how they look.

They looked OK, and even had some cracks in places, so I left them to cool a bit, but they didn’t seem to be firming up too well. I wasn’t sure if they’d firm up properly, but I was sure they could take some more baking, so it was back in for another 10 minutes for a total of 30 minutes baking. 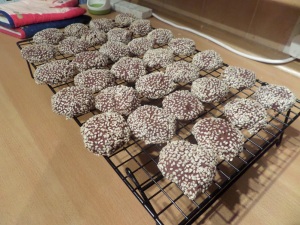 They seem to be holding together… we’ll just have to hope they firm up by tomorrow! They taste much more chocolaty than the previous ones… maybe a bit too much to be honest. Maybe 2 Tbsp of cocoa is enough.