Bacon, as we all know, is what makes everything better. From hangovers cured with cheap white bread bacon sandwiches, to wrapping chicken in bacon, it’s all good.

So when The Grandiad told us how to make it at home, coinciding with our local butchers getting burgled, it was clearly a sign to support our local shops, buy some pork belly, and get making bacon, and pairing it with a sourdough loaf for the most home-made bacon sarnies we’ve ever had.

So the cure starts…

After nearly a week of curing, draining and re-rubbing every couple of days, we’re supposed too dry it out and put it in the freezer until firm, but not frozen, and cut slices.

But first we ned to remove the rather hairy skin. This wasn’t mentioned, and is rather fiddly! You feel like you’re removing half the meat, although then you check it’s nearly all skin and grisly. Thankfully we were planning to keep a chunk back to freeze, which will use in the future to make Boston beans, so we wrapped an edge in the skin for this purpose.

Slicing after freezing was easier than expected… or at least easier than removing the skin!

To have our bacon sarnies for Saturday breakfast the bread needs to be cooked on Friday evening. Normally I start a sourdough in the morning and it’s done by dinner time, so I need to change things up if I want to bake on a work day, as I won’t be around for all the steps, so here’s what I’m doing:

It was kinda puffy after the long fridge proof, but after cooking it looks damned good!

The crust looks thicker on the outside than it actually is once you cut into it, and it turned out to be a lovely chewy loaf. I think if I wanted a more substantial crust I’d turn down to 200C fan for the uncovered 15mins, rather than 180C fan.

The bacon looks more like pork than bacon while it’s cooking. 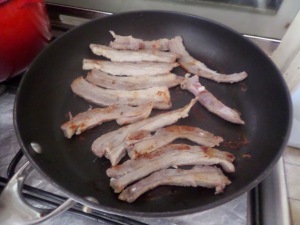 However it sure tastes like bacon when we ate it! Possibly the best bacon sarnies we’ve ever had: thick salty bacon, with lovely chewy sourdough.

We’ll certainly be making our own bacon again, but we might try smoking it next time!