More pickling! This one isn’t using up any garden produce, although that’s there the idea started as this recipe uses what we call a reasonable amount of garlic, and what other people call a year’s supply of garlic. But our garlic isn’t dry enough yet, but it’s not like we struggle to find 40 cloves of garlic in our house :)

We love the lime pickle you get at British Indian restaurants. The stuff you get from jars in supermarkets is OK, but it’s not like the restaurant stuff. So The Curry Guy to the rescue! His blog and ebooks specialise in British Indian restaurant foods (as opposed to authentic Indian food, which while authentic isn’t what we’re looking for a lot of the time). He has a recipe for lime pickle that, and I quote, “blows store bought away”, so that’s what we’re making.

It starts with 1kg of limes, that we halves, juiced, then stabbed with a knife and halved again into quarters. Added to this are the aforementioned 40 cloves of garlic, plus 125g of course sea salt and 50g of hot chilli powder. After mixing this up, the limes and garlic get steamed for 15 minutes, and the leftover salt & chilli gets added to the lime juice and popped in the fridge. 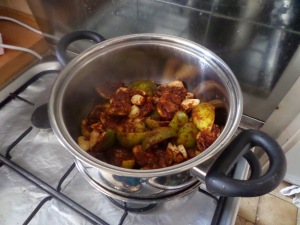 After cooking this gets put in a bowl and covered and left to sit on a warm windowsill for a couple of days.

After two days we heat 150ml of vegetable oil until about 200C then add 2 Tbsp cumin seeds, 3 Tbsp black mustard seeds and 1/2 tsp asafoetida. Once the mustard seeds are happily popping we pout over the limes (which have been transferred to a glass bowl, given the heat). Then the lime juice is mixed in, and it gets left out, covered with a tea towel, for another two days.

After two days it’s time to chop it up in the food processor.

This left us with some bits still mostly whole and some completely mushed, which I hope gives us the chunky consistency we like. Maybe next time do it in two batches.

The it’s into sterilised Kilner jars, and we have to wait at least two weeks before we can try it :(