I was having problems coming up with an idea for this week’s Stir Fryday. Thankfully Soph reminded me we have some fermented black beans she bought some months ago, so we’re going to use those to be the sauce for a chicken stir fry with rice.

The black beans need to be soaked before using. First in boiling water. 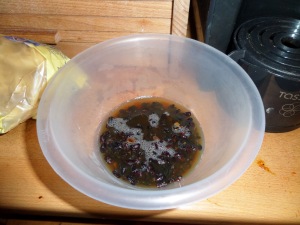 The black beans get strained and added to the sauce, and later we decided not to bother with a separate marinade for the chicken and just bunged that in and use a slotted spoon to get it out to fry it, then the veg, then added the sauce and served. Nice and easy :)

Wow – even better than last week! The black beans give it a really authentic flavour, and the sauce worked really well with a mix of sweet, sour, bitter and hot.