After a year of making sourdough bread every week, I admit… it’s got to be a bit of a chore… so I went searching for something more interesting to do with it.

I’ve made Sourdough Pancakes before, and that got me looking for other things to try and I stumbled across: http://sourdoughsurprises.blogspot.se/ Every month the challenge goes out to use up excess sourdough starter in interesting ways. I’ve decided I’m going to join in with this, and so next week I’ll be doing some popovers (basically Yorkshire puddings that Americans cook in muffin tins and eat as a cake or snack with a cup of tea). I just need to get my thinking cap on for what sort to do!

Meanwhile I found a previous month’s theme on muffins, and this recipe for Buckwheat Sourdough English Muffins stuck out. However I don’t have buckwheat, or wholemeal spelt, so I just raided the cupboard and found what flours I had already open and came up with:

I mixed all the dry ingredients together, and separately mixed all the liquid ingredients together, then bunged them in the mixer and let it knead them (with more help than I’d like from me scraping down the sides) until I had a lovely glutenous mixture. This went in an oiled bowl and proved for… well longer than it should probably due to excess faffing around on my part: about 2 hours!

Previously I’ve done muffins using food rings, but this recipe calls for rolling out and cookie-cutting the muffins out. Sounds like a lot less hassle, so I’m following along… although I think I rolled out too thin as I got 10 muffins not the 7-8 recommended. I swear they look thinner once they’re cut out! Anyway they then prove for another 30 minutes…

Then they get fried in a heavy non-stick pan using some oil spray to keep them from sticking. 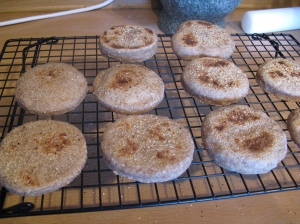 We then let them cool (a bit) before toasting and eating with jam on!

They weren’t quite cooked through fully. Next time I think a lower heat for longer is called for. Still: delicious and as Soph said: recognisably muffny.

One thought on “Sourdough Breakfast Muffins”