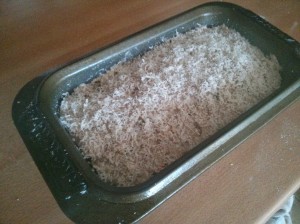 Having re-read the original recipe… I realised I was turning down the temperature too much. So in an attempt to avoid the moistness as the bottom of the cooked loaf I’m doing 15mins on 230c fan, then down to 200c fan (instead of 180c fan) for the other 45mins. 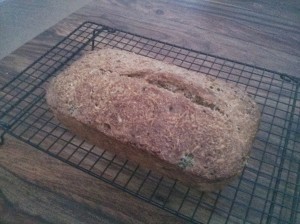 Looks good out of the oven! The split in the middle isn’t as pronounced as previously, but I’m not sure if that’s the higher heat or the different dough with parmesan top. Given most of the rise is in the oven spring in the first 15 minutes it’s probably the batter. Anyway: the shoulders didn’t tear so it’s done its job!

Hmm… still moist. I could have put less water in I suppose… but I’ve tried reducing it before an that didn’t help. So… next time it’s keeping the higher temp, and letting cool in the oven for an hour to see if that works. Having beaten the shoulder tearing issues, I’m determined to sort out the moistness issue!

To taste it we toasted it (to sort out the moistness) and boy is it spicy! More importantly it’s delicious. The cheddar & jalp taste works great (as expected given the cheese straw success) and the scotch bonnet really adds a kick. I’m definitely going to do it again. I just need to beat the moistness problem…