In week’s rye sourdough I decided to use some potato flour. On the second day you add 330g of flour to the starter, and with my experiments I always use 130g of rye flour plus 200g of whatever I’m experimenting with.

Soph got the potato flour from Holland & Barrett. I don’t like giving our money to a company that sells so many SCAM products (Supplements, Complimentary & Alternative Medicine) but they sell a range of flours, nuts & dried fruit that no other high street stores do, so sometimes needs must…

The potato flour was very lumpy in the mixture, and it took lots of mashing with a fork to mix it in, and when I poured it into the tin I found one 2cm lump that hadn’t mixed properly. Next time I use potato flour I’ll weight it separately and pour it in while mixing. 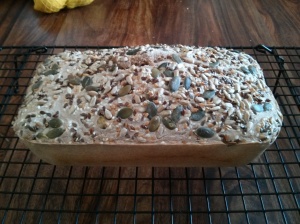 As the potato flour is pure white the dough was very pale, and after cooking the loaf was pale too, but the internal temperature was over 90c so I took it out after the normal amount of cooking.

Cutting into the loaf I was happy to see that there wasn’t an air pocket at the top. I’m not confident that reducing the proving time has fixed that issue. However there was a gooey bit at the bottom of the loaf, so it probably could have done with another five or ten extra minutes in the oven. I’d probably aim for high 90s in temperature rather than accepting anything over 90c next time.

Tasting it is a bit odd. It tastes, unsurprisingly, a bit like a potato cake. The thing is you’re expecting to taste bread, so it’s a bit odd. It’s a nice taste, and it went well with Soph’s tuna salad lunch, it’s just not what you expect when you bite into bread.

One thought on “Potato Bread”